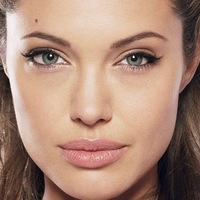 A model at age 16, Angelina Jolie was seen in several music videos, most memorably the Rolling Stones, Lenny Kravitz, Meat Loaf, and the Lemonheads. After dropping her studies at the New York University, Jolie joined the L.A.'s Met Theatre Group alongside Ed Harris and Holly Hunter. After several undistinguished roles, including one in Cyborg II: Glass Shadow, Jolie landed a role in the virtual-thriller Hackers (1995, Matthew Lillard and Jonny Lee Miller). Despite criticism about the film, her performance received rave reviews. This would just be the beginning. Several years later, Joile would earn the status as Hollywood's latest 'bad girl' and would become an A-list actress for her brilliant performances. She would achieve wider recognition after being nominated for an Emmy and a Golden Globe Award for her role as Cornelia Wallace, costarred Gary Sinise, in TNT's George Wallace (1997) and exploded playing model Gia Marie Carangi on the HBO's super hit Gia (1998).

"Because I am a bad girl, people always automatically think that I am a bad girl, or that I carry a dark secret with me or that I'm obsessed with death. The truth is that I am probably the least morbid person one can meet. If I think more about death than some other people, it is probably because I love life more than they do."

I have no time for a reading books))

I have not it